A few weeks ago we had an Open House for parents, family, and friends of FOCUS students at Collin. This is always a favorite of mine because I love getting to meet the families that have shaped the students I work with and love. We had a big turnout this year, and I got to meet so many families that were excited about how God has changed their students' lives through our ministry. Here are some photos and a testimony that one of my student leaders, Clarissa, shared that night:


One of the girls I mentor, Clarissa (pictured above singing), shared this story:
"I’m a sophomore here at Collin and this is my second year involved in this ministry. I really have a hard time with speaking about God and not making it all about me. I love to steal the show and I was really worried about doing that tonight so instead I’m going to tell you about a time where I really stunk it up and God was super faithful. Now before getting involved with FOCUS, I was every parent’s nightmare teenager. I knew about FOCUS from the time I started at Collin, and had met a good number of people who tried to befriend and include me. But I was not open. From my perspective, there was nothing wrong with the things I was doing and the way I was living. I was drinking, partying, doing drugs when a lot of y’all met me and I was just, in general, making a mess in my life. But God wasn’t done with me and didn’t want me to stay where I was. Over time, when that became clear to me, it was a long and painful process of confronting the choices I had been making. Through that, God kept putting these lovable nerds in my life and showed me the kind of work He had for me. The friends I’ve made while in this ministry are the best I’ve ever known and they are just as broken as I am, and God has and is still changing their hearts and lives 180°. One of the friends that comes to mind when I think of the work God has been doing in the lives of other people is a close friend I met about a year ago. The first time we hung out, she told me about her life and just the rough spot she was in. She’s experienced a lot of hurt and abuse, and was telling me how trapped she felt in her current relationship with someone who treated her terribly. She told me she wanted to take the leap and pursue a life with Christ but she was scared, and was worried about the repercussions of leaving her old life behind. But God is so good, and never stopped coming through. Her life since then has not been easy, but the reason I speak about her tonight is because she teaches me a lot about what it means to be a disciple. She is someone who loves people so well, and through what can only be the Holy Spirit, makes a real difference in other people’s lives. Definitely mine included. Through her and many others, God shows me that the life of a disciple is hard sometimes, there are unique struggles that come with thinking and acting differently than the world, and the temptation to make those old decisions creeps back up again at times, but it’s so rewarding to know God includes me in His plans for the world. So while I still have a long way to go, God has brought me so far from where I used to be."
God is changing lives and hearts here at Collin and this is just a small sample! Thank you so much for being part of this change and supporting what God is up to on campus. This wouldn't happen without you! 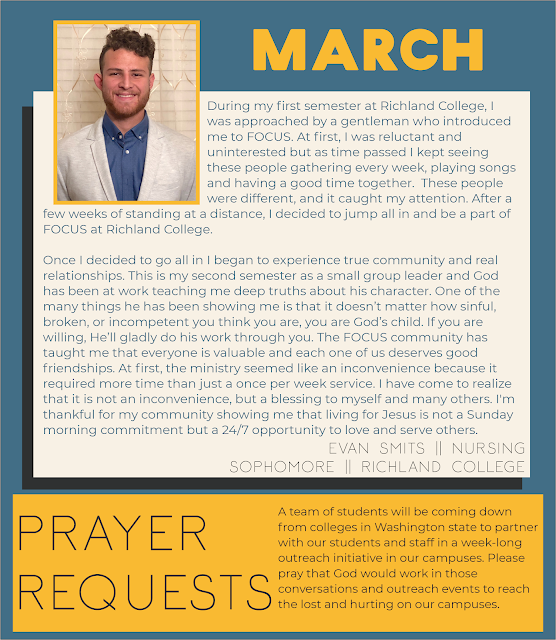 Danielle
I joined FOCUS while a junior at the University of Texas at Dallas. It was there that I learned what it meant to be a disciple of Christ. I graduated with a Master's degree in Communication Disorders in 2011. Two years after graduation I became a ministry intern with FOCUS at The University of North Texas in Denton. After my internship, I joined the FOCUS staff at Collin College in Plano, and worked there for 2 years. After that I went back to Denton to serve at TWU for 2 years, and God has so kindly allowed me to come back to Collin, where (hopefully) I'll stay for a while!